It’s been a little while since we published anything here, but only because we’ve been busy out helping our friends and neighbors around Tucson, Marana and Oro Valley with their garage doors!

The summer is certainly kicking in, and this upcoming week we’ll be feeling it for sure with temperatures expected to get well over 100 degrees. I’ve even heard some predictions of around 110 by the end of the week!… No matter what the thermostat says, I hope you’re all managing to stay cool and hydrated. And don’t forget to make sure your pets have extra water too! This is the time of year I dread hearing about pets who needlessly suffer from exposure to the heat. Please, take care of them.

Off my soapbox now, and on to share bits and pieces of news from right around the Old Pueblo that I’ve had great discussions about with recent customers. I figured I might as well share some of them here, too.

This first story is one that I hope gets the recognition it deserves, completely apart from any politics. Politics has no part in this story – it’s about a hard working, intelligent person committed to her community who was the victim of senseless violence. Whether you agree or disagree with her political beliefs, or those of the people mentioned in this article, has no bearing on the sacrifice she made or the respect she deserves. I hope you agree with me on that point. The U.S. Navy on Saturday commissioned a warship named for former Rep. Gabrielle Giffords (D-Ariz.), making it the third Navy ship ever to be named after a living woman.

Giffords resigned her House seat in 2012 after surviving an assassination attempt at a grocery story in Tucson, Arizona. Then-Secretary of the Navy Ray Mabus contacted Giffords that day to tell her that a warship would be named in her honor. The 418-foot littoral combat ship was built in Mobile, Alabama, and christened by Dr. Jill Biden in 2015.

“Indeed throughout the world, and throughout America, there isn’t a name more universally loved, more admired, more respected than the name of Congresswoman Gabrielle Giffords,” Pelosi said.

“It’s designed to be agile, quick to adapt, able to swiftly maneuver in the roughest of waters,” Clinton said of the ship. “Every moment of every day that the sailors who man this ship are given the great privilege of defending our country, they only have to look toward this ship’s namesake.”

Giffords called the commissioning “an incredible honor,” and thanked members of the military for their service.

And in Marana, we saw more news about the good folks that help protect and defend us on a daily basis.

Town of Marana broke ground on a new police HQ

MARANA, Ariz.(KGUN9-TV) – After three years of waiting, Marana Police are getting a new police headquarters.

The Town of Marana broke ground on the new building Wednesday morning, according to a press release from Marana Communications Manager.

The Council decided that the public wholeheartedly supported the project. Town staff didn’t receive a single complaint from the public.  Construction is expected to be complete by summer 2018.
Town of Marana broke ground on a new police HQ – KGUN9.com

And in Oro Valley we have a new town manager to welcome into the fold! 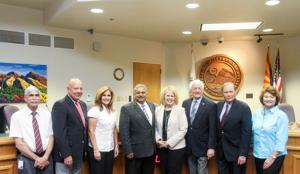 Mary Jacobs, who is now working as an assistant city manager in Sierra Vista, will start her new job Sept. 5.

Jacobs has worked as Sierra Vista’s first assistant city manager for nearly two decades. Jacobs said she did not apply for the position during its initial search primarily because her daughter was still in high school. The town opened the position to a second search with CPS-HR Consulting and, with her daughter heading off to college in Chicago, Jacobs said she knew the time was right for a change.

“Tucson has always been my home,” she said. “Don’t get me wrong, I love Sierra Vista and it will always have a special place in my heart. Now I’m back in the Tucson metro area and I have a lot of knowledge about Arizona, the Tucson economy and connections within the state because of my long tenure. I just felt that it would be a good fit, and that I could really bring a lot to the town of Oro Valley.” Via tucsonlocalmedia.com

So yeah, lots of stuff going on around the Tucson area on top of all the garage door repairs that have been keeping me hopping like a frog on hot asphalt.  But remember, I’m never too busy to take your call when you have problems with your garage door.  John’s Garage Doors is here to help you!  (520) 989-0381