John’s Garage Doors, based in Tucson, Arizona, has announced with pride that they have received yet another five star review for their garage door service. On their Google Maps page, Eric S. expressed his deep appreciation for the service that John Mucciacciaro, the owner of the company, had provided them. Eric is the friend of an elderly homeowner who was told by another company that his garage door was “un-fixable” and that he would have to get a new garage door. To their surprise, John told them that he could fix the garage door and he did, for a fraction of the price of a new door.

John Mucciacciaro himself says, “It was really an honor to help people like Eric and the elderly homeowner and I sincerely appreciate their kind words and their taking the time to provide our company with a five star review. I do try hard, and kind folks like Eric who appreciate it and share their experiences with others is what keeps me and my business going.” 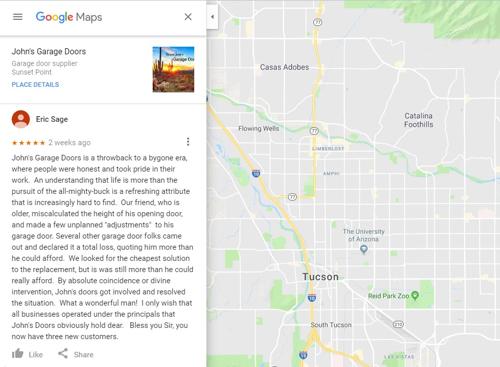 In his review, Eric S. said, “John’s Garage Doors is a throwback to a bygone era, where people were honest and took pride in their work. An understanding that life is more than the pursuit of the all-mighty-buck is a refreshing attribute that is increasingly hard to find. Our friend, who is older, miscalculated the height of his opening door, and made a few unplanned “adjustments” to his garage door. Several other garage door folks came out and declared it a total loss, quoting him more than he could afford. We looked for the cheapest solution to the replacement, but it was still more than he could really afford. By absolute coincidence or divine intervention, John’s Doors got involved and resolved the situation. What a wonderful man! I only wish that all businesses operated under the principles that John’s Doors obviously hold dear. Bless you Sir, you now have three new customers.”

John explains that his overhead is relatively low and he doesn’t have to pay commissions to sales people. That is why he is able to offer substantially lower prices compared to those offered by large companies. He is capable of doing various kinds of repair work. These include garage door spring replacement, complete door rebuild, track repair or replacement, garage door opener installation, routine maintenance, roller repair or replacement, door rebalancing, and fixing of noisy doors.

Another part of a garage door that often fails is the garage door opener. John points out that while most people believe that they will need to buy a replacement for the automatic door opener once it stops working normally, sometimes the opener isn’t the actual problem. He is committed to informing customers about their options when a door isn’t opening or closing properly and will never push a new opener if the actual problem is something simpler and less costly like new rollers or some basic door maintenance.

John has been repairing garage doors for more than 25 years around the country, but has chosen to settle here, offering Tucson and surrounding areas his services for nearly a decade. His company can also perform the installation of new garage door openers and is capable of handling all types of residential garage doors. However, they specialize in repairing garage doors and can fix most problems. Their immediate service areas are Oro Valley, Saddlebrooke, and Marana but also help customers throughout the Tucson area..

Those who are interested in garage door repair or new garage door opener installation in Tucson and nearby areas may want to visit their website or call John directly on the phone. When you call John’s Garage Doors, you’ll talk with John on the phone and John will be there to do the repair work himself.

Previous Post Garage Door Repair In Tucson Gets Another Five Star Review Next Post The Heat is On!